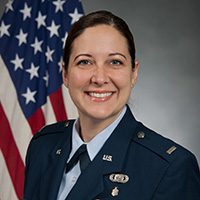 Capt. Michelle Bernard is the Assistant Professor of Aerospace Studies for Detachment 772 at Charleston Southern University in Charleston, South Carolina. She is responsible for recruiting and training highly qualified men and women with the intent of developing them into the next generation of Air Force leaders. In addition, Bernard instructs entry-level curriculum which covers Intro to the U.S. Air Force and Evolution of the U.S. Air Force. Bernard enlisted in the Air Force in 2001.  She graduated with a Bachelor of Science Degree in organizational management and earned Magna Cum Laude from Warner University in 2008. She is a 2016 distinguished graduate from the Officer Training School program at Maxwell AFB, Ala.