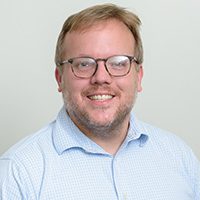 Dr. Dustin Ousley is assistant professor of music/director of choral activities and coordinator of choral music education at CSU. After receiving a Bachelor of Arts in music from Furman University, Ousley received the Master of Music and Doctor of Musical Arts degrees in choral conducting from the University of North Carolina at Greensboro and the University of South Carolina respectively. He served as the conductor of the USC Women’s Chorus from 2013-2015.

Prior to his service at Charleston Southern, Ousley spent seven years teaching choral music in the public schools of North Carolina and three years as adjunct professor of music/director of choral activities at Coker College in Hartsville. As a church musician, Ousley has served as music director for several congregations in the Carolinas, most recently, Shandon Presbyterian Church in Columbia. He currently serves as music director at St. Andrews Presbyterian Church. From 2006-2010, he served as the director of the Catawba Valley Community Chorus in Conover, N.C. He is currently serving in his fourth season as the Artistic Director of the Sandlapper Singers, a semiprofessional choir based in Columbia.

Ousley conducts the Concert Singers, a select group of auditioned students who performed twice this past season with the Charleston Symphony Orchestra—Benjamin Britten’s Saint Nicholas in the fall and Mozart’s Requiem in the spring. They will combine this fall to present Faure’s Requiem and selections by English composer, Hubert Parry. This choir also embarks on a European tour every two years and has performed in various countries including Germany, Switzerland, Bulgaria, Austria, Italy, Spain, England, Scotland, and the Czech Republic. The group plans to tour Ireland this summer. Ousley also conducts the Singing Buccaneers, an all-male ensemble open to all students on campus. His class responsibilities include courses in Musicianship (theory/sight singing/aural skills), Elementary Music Methods, and Applied Voice. He has previously taught Conducting, Secondary Music Methods, and Music Appreciation at other institutions.

In addition to his teaching/conducting experience, Ousley has performed in over 50 operas/musicals over the years, most recently the title role in Opera at USC’s production of Candide in 2013. Other favorite roles include Little Bat in Carlisle Floyd’s opera, Susannah, Pseudolus in A Funny Thing Happened on the Way to the Forum, Leo Bloom in The Producers, and the Baker in Into the Woods. His work as a professional soloist includes Ralph Vaughan Williams’ Hodie and Fantasia on Christmas Carols, Mozart’s Regina Coeli, J.S. Bach’s Magnificat, Brahms’ Liebeslieder Waltzes and John Corigliano’s Three Irish Folksong Settings.

The opportunity to inspire students who wish to pursue a profession in your field of study is my purpose as an educator. But to have the opportunity to pursue that confidently and publicly in an atmosphere where the integration of faith and learning is encouraged and expected makes for a beautiful combination that not only prepares students for the workforce, but also nurtures them to be disciplined, but fair...kind, but sturdy...talented, but humble.

"Disguising Learning for the Distracted Learner" (Faculty Kick off)