Mass Communication and Journalism, The University of Southern Mississippi (PhD)

Journalism, The University of Georgia (MA) 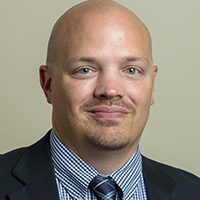 Dr. Jason Peterson is an Associate Professor of Communication at Charleston Southern University, and is Chair of the communication department. In the classroom, he specializes in multimedia reporting and writing, multimedia production, media history, communication law and ethics, and sports communication. His research interests include the Civil Rights Movement and sports journalism. Peterson received the J. William Snorgrass Memorial Award for Outstanding Paper on a Minorities Topic from the American Journalism Historians Association in 2009 and was a finalist for the award in 2017. In 2012, he was honored by the organization as a finalist for the Margaret A. Blanchard Doctoral Dissertation Prize. Peterson’s research has been published in American Journalism and The Southeastern Review of Journalism History. His book, Full Court Press: Mississippi State University, the Press, and the Battle to Integrate College Basketball, was published by the University Press of Mississippi in 2016.

Prior to entering academia, Peterson worked as a general assignment reporter for The Macon Telegraph in Macon, Georgia, and as an education and police reporter for The Daily Herald in McDonough, Georgia. He later served as the publications and marketing coordinator for the College of Education and Psychology at The University of Southern Mississippi. Peterson is a member of Seacoast Church in Summerville.

“Mississippi’s Forgotten Son: Billy Barton and his Journalistic Battle for Redemption in the Closed Society.” American Journalism 37, no. 1 (Winter 2020): 66-97.

“A ‘Race’ for Equality: Print Media Coverage of the 1968 Olympic Protest by Tommie Smith and John Carlos,” in From Jack Johnson to LeBron James: Essays on Sports, Race, and the Media, Chris Lamb (ed.), Lincoln, NE: University of Nebraska Press, January 2016.