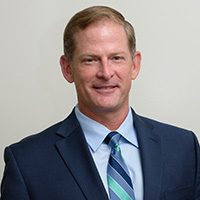 Colonel Christopher “C.J.” Will, USAF, Retired, is the chair of the Department of Aeronautics and is responsible for the accreditation, creation and administration of an advanced aeronautics curriculum, flight operations, community outreach, and developing partnerships with area colleges, local, county, state, and national government and businesses. He is nationally recognized as a leader in pilot recruiting, aviation outreach, diversity, and training and has served as a professor of aviation, aviation attorney, and flight instructor for over two decades.  He is a recently retired Air Force Colonel and combat-experienced Command Pilot, and has earned FAA Airline Transport Pilot, Certified Flight Instructor/Instrument, Multi-Engine Instructor and Unmanned Aerial System operator ratings.  He and his wife, Rachael, recently celebrated their 30th wedding anniversary, and have three children.

He most recently served as Commander, 765th Detachment, Air Force Reserve Officer Training Corps, located at The Citadel in Charleston, S.C., where he was responsible for the supervision and training of the second-largest cadet corps in the Air Force, with over 450 cadets. Prior to his assignment as Commander of the 765th Detachment, Will served as the Air National Guard Liaison to the Deputy Chief of Staff for Operations, Headquarters Air Force, where he led several efforts on behalf of the Chief of Staff to resolve the Air Force pilot shortage. He practiced aviation law as an attorney with the Department of Justice, and has taught aviation business, safety, law, and ethics courses with Embry-Riddle Aeronautical University since 2001.

He has flown combat missions in Operation Southern Watch, Operation Iraqi Freedom and Operation Enduring Freedom. He is a Command Pilot and Instructor with 52 combat missions and over 2,000 total flight hours in the F-16C/D, MQ-1B, and AT-38C.