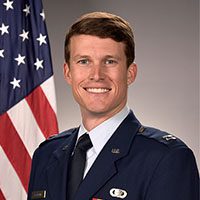 Capt Brandon Bagwell is the Operations Flight Commander and Assistant Professor of aerospace studies for Detachment 772 at Charleston Southern University in Charleston, South Carolina. He is responsible for recruiting and training highly qualified men and women with the intent of developing them into the next generation of Air Force and Space Force leaders. In addition, Capt Bagwell instructs entry-level curriculum which covers Intro to the U.S. Air Force and Evolution of the U.S. Air Force. Capt Bagwell commissioned through AFROTC from Clemson University in 2014 with a Bachelor of Science in industrial engineering.