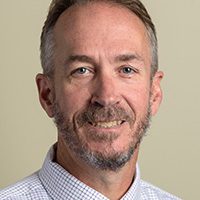 Peter Beck serves as Professor of Christian Studies, the Ott Chair of Christian Theology, and Director of the Honors Program at CSU. In addition to his book The Voice of Faith: Jonathan Edwards’ Theology of Prayer, he has published numerous articles on Jonathan Edwards, the Puritans, and Baptist studies. He writes and speaks frequently on the integration of faith and learning. Additionally, Beck has more than 15 years of pastoral experience and currently serves as Lead Pastor of Doorway Baptist Church in North Charleston, S.C. He and his wife, Melanie, have been married 35 years and have two children, a son and a daughter.

God called me to CSU to impact lives for His Kingdom. I see the fruit of that calling every day in the classroom, in the hallway, and in my office. Changed lives keep me going.

Monographs
Great Things: The Missionary Life and Theology of William Carey, in progress
[anticipated completion of 2022]

“The Council of Ephesus,” in Historical Christology for a Contemporary Church,
Eugene, OR: Wipf & Stock, 2019

“‘The Glorious Work of God’: Revival Among Congregationalists in the 18th and 19th Centuries,” in Pentecostal Outpourings: Revival and the Reformed Tradition,
Grand Rapids: Reformation Heritage Books, 2016

“A Resolved Piety: Living in Light of Eternity with Jonathan Edwards,” in The Pure Flame of Devotion: Essays in Honour of Michael A. G. Haykin, Toronto: Joshua Press, 2013

“Training Up Children in the Way that They Should Go: Jonathan Edwards’s Advice to Young Converts,” Puritan Reformed Journal, January 2016

“Trans-Atlantic Friendship: Andrew Fuller and the New Divinity Men,” in The Journal of Baptist Studies, Winter 2016

“Worshiping God with Our Minds: Theology as Doxology among the Puritans,” Puritan Reformed Journal, July 2013

“The ‘Modern Question’ and the Missionary Mandate: The English Baptism of
Jonathan Edwards,” The Andrew Fuller Review, Spring 2013

“‘The Fountain of Life’: The Excellency of Christ in the Preaching of John Flavel,” Puritan Reformed Journal, January 2013

“Making ‘Gospel Sense’ of Suffering: The Prison Epistles of Thomas Hardcastle,”
Eusebia: The Bulletin of the Andrew Fuller Center for Baptist Studies, Winter 2010

“The Fall of Man and the Failure of Jonathan Edwards,” Evangelical Quarterly, July 2007

“A Southern Exposure: The Theology of Jonathan Edwards in the Writings of Jesse Mercer,” The Journal of Baptist Studies [Internet], Spring 2007
“Edwards and Indians: Inclusivism or Evangelism?” Fides et Historia, Fall 2006

Academic Presentations:
“The Master Plan for Higher Education: A Discipleship Model for Character Formation and Human Flourishing,” The Character of the University: Baylor Symposium on Faith and Culture, [October 2019]

“A Biblical, Practical Theology for the Integration of Faith and Learning,”
Southeast Regional Meeting of the Evangelical Theological Society, March 2018

“Training Up Children in the Way that They Should Go with Jonathan Edwards,”
National Meeting of the Evangelical Theological Society, November 2015

“Teaching the Millennial Generation,” Annual Meeting of the International Association of Baptist Colleges and Universities, June 2014