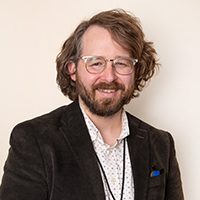 Kyler earned his Bachelor of Arts in interdisciplinary studies from North Greenville University and his MFA in fiction from Converse College. He has published short fiction as well as a recent critical analysis of John Steinbeck’s novella The Pearl. Kyler also serves as the director of worship for Riverbluff Church. He and his wife Katie have two high-energy daughters and an 80 pound lap dog. He loves to discuss American literature, comic books, creative writing, and Penguins hockey.

I work at CSU because my faith is just as important to me as any academic pursuits. CSU gives me the opportunity to interact with students academically as well as spiritually. I want to help students discover who God has made them to be and how they can better the world they live in.

“‘So That One Beautified The Other’: An Ecocritical Perspective on Character and Place in John Steinbeck’s The Pearl, August 2019.

“The Voodoo Man at the Mainline Café,” Gadfly Online, September 2012.